Demonstrators marched in Kirkcaldy today, to call for justice for those who have died in police custody and for an end to the culture of police impunity.  The march was organised by relatives and supporters of the Justice for Sheku Ahmed Tejan Bayoh campaign, which was launched following his death whilst in the custody of Police Scotland on Sunday 3rd May.

The extent of Bayoh’s injuries and the fact that the 9 officers involved refused to provide statements on the night and weren’t questioned by the inquiry for 32 days raises serious concerns about the circumstances which led to his death, with his family having already been given 5 different versions of events by the Police.

This afternoon, hundreds gathered at Kirkcaldy Town House, to hear from members of Sheku’s family and supporters before marching through town. 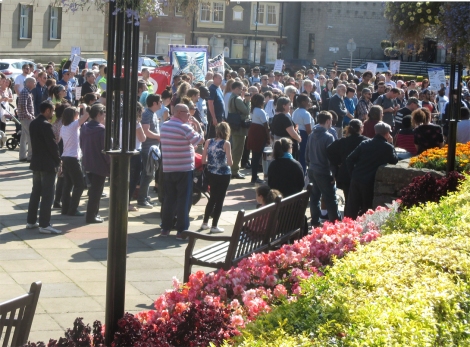 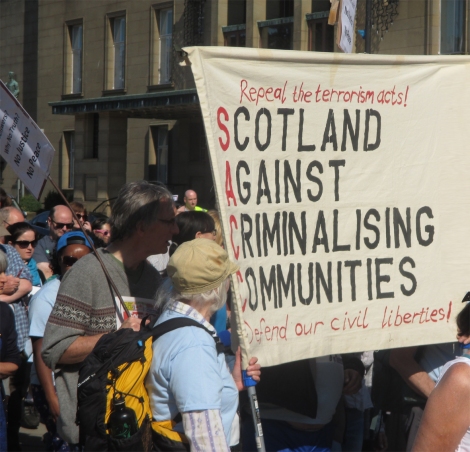 The demonstration paused at Kirkcaldy Police Station, where chants of “Who killed Sheku Bayoh?” and “Police Scotland, shame on you” rang out:

A minutes silence was observed before the march headed on to the final rallying point.

There was a moving and palpable anger today, at a system which has failed Sheku Bayoh and his family and at a Police force which is continuing to fail those searching for justice.  One of the campaign organisers challenged the police to stay true to the line they’ve peddle over the years, “If you have nothing to hide, you have nothing to fear.” While the family’s lawyer emphasised the fact they began the process with an open mind, their faith in both the Police and the rigour of the Police Investigations and Review Commissioner’s investigation has understandbly waned.  The family’s determination, strength and courage, in the face of a police and media campaign to discredit them, is beyond comprehension.

The recent resignation of Police Scotland’s Chief Constable, Sir Stephen House, may be an attempt by those at the top to draw a line under recent failings – but there was little confidence from those in attendance today that a personnel change will be enough, either to achieve justice for Sheku Bayoh or to prevent further deaths in custody.

If officers can avoid questioning for so long after being on the scene when a man lost his life, how can we be confident there aren’t killers in uniform on our streets?  If police can lie to Sheku Bsayoh’s family about the circumstances surrounding his death at least four times, how can we trust they will now tell the truth?  Do black lives matter in Scotland?

The answers to these questions remain unanswered.  Until that changes, there can be no justice for Sheku Bayoh and there must be no peace for Police Scotland.

Who called the armed police?