GREETINGS COMRADES, BROTHERS AND OTHER BROTHERS OF THE LABOUR AND TRADE UNION MOVEMENT. I am Frank McAllister, Labour and Cooperative Party MP for Cathcart and Dunwoody East and I relish this opportunity to share my thoughts, ideas, musings and angers on this site. While I am new to this practice of “dogging” this is not my first foray into cyberspace. Once many moons ago I entered into a heated exchange of ideas with a Nat Seperatist over the recently launched “hotmail”. This lively exchange of discussion and debate was unfortunately characterised by Glasgow Sheriff Court as a “concerted campaign of violent and disgusting bullying by email, with threats of an extreme physical nature”. This rather unfortunate interpretation of events COMPLETELY IGNORED that said Nat Seperatist was threatening both my livelihood and the welfare of my (then) wife and three children, when he callously and deliberately decided to stand against me in my safe seat of Cathcart and Dunwoody East. Fortunately his campaign of terror was unsuccessful and I continue to pretty much by and large occasionally represent the acceptable people of my constituency, some of whom I often meet now and again in pubs and on trains. 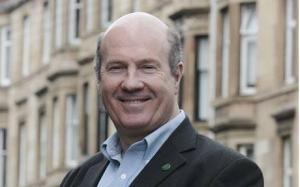 This experience has not deterred me from taking the world wide web to my heart, I frequently go on the “you tube” in the search for funny videos to break up the monotony of waiting for the Parliament bar to open. On the you tube you can find what I see are often well argued and cogent points on many issues of the day, largely relating to the benefit claims of Eastern Europeans or the veracity of certain foreign bombing campaigns, two issues which have been at the heart of the McAllister Parliamentship. I also saw many you tubes on the issue of “Scottish Independence”, or to give it it’s correct term, fascist seperatism. I responded to many of these hate videos with my own thoughts which largely consisted of the words “cunts”, “arseholes” and “volatility of remaining in a fiscal union without a political framework”. It was one evening returning from the Parliament bar with my good friend and close drinking buddy Ian Davidson MP that we both engaged in some of this you tube discussion with the advantage of a pleasant tipsyness. Ian commented that I should collate my thoughts on to my own blog. Unfortunately for reasons that are between me and the Labour Party Whip my blog is actually run by a 27 year old staffer called Sebastian who writes pish about council fetes I may have attended and certain political opinions I am supposed to endorse.

I was therefore very glad that “A Thousand Flowers” has agreed to give me a platform to outline the positive case for the Union. I intend to start this positive case for the Union largely by talking about how Scottish Seperatism is the fucking worst idea since non-alcoholic lager and minimum pricing. For a start let us outline who are the SNP. Put in simple terms, they are cunts. Total cunts. They aren’t us, the Labour Party, the divine rulers of Scotland since time i-fucking-memmorial. Don’t they know there’s a reason it’s called LABOUR SCOTLAND? These chancers simply have no relationship with the broad trade union and labour movement. I on the other hand meet Jim, Kenny and Ian every other Wednesday for a beverage where they are happy to convey the loyalty and support of their 30,000 union members to my leadership. Eat that one Salmond you fat bastard. His deputy Nicola Sturgeon is no better. She is so far removed from the mainstream leadership of the modern trade union and labour movement it’s sickening – I mean she’s a woman for fucks sake, what the hell is she going to know about real ale?

There are those of you who will say that the values of the Labour Party would be better served in an indpendent Scotland. To those of you I ask, have you been to the Scottish Parliament? Are you aware it has NO in house parliament bar? Is that a Labour value? I tell you it is not one of my values, not one of Eric Joyce’s values and it most certainly is NOT the values of Lord George Foulkes.
Many of you will refer to the negative legacy of Thatcherism as an argument to vote Yes to making Alex Salmond your dictator for life. I too often raise the immense destruction inflicted by Thatcherism on Scotland, generally once every five years along with the going-to-the-bingo and take-care-not-to-die-before-you-vote-labour kind of chat I need to get consistently re-elected. But perhaps it is time for a more balanced judgement of Maggie. I for one have always had conflicting views on Mrs T. On the one hand I admired how consistently she was able to raise the flag for Britain and get into bashing johnny foreigners in a way I am currently unable to do so bar shouting at the telly when A Bridge Too Far Is showing. On the other hand, her continuing occupation of 10 Downing St acted as what I must accept has been the biggest obstacle to the much needed McAllister Prime Ministership, with the commitment to cheap lager and bookies this country so desperately needs.

He looks fucking mental, and believe me he is.

Put simply her strength and determination always conflicted with her ability to fuck up my career path. In many ways she reminds me of my ex wife Sheila. A fiery and intelligent women, with drive and passion she was often able to use said talents to pull me up for various kinds of shite (though her accusation that I shat in the washing machine remains unproven without further forensic tests. Coming back from Eric Joyce’s at 3.40 am pished and lying on the kitchen floor trouserless and pished is, at best, circumstantial evidence).
So while Margaret Thatcher went through Scotland much in the same way I go through a 6 pack of farmfood scotch eggs, perhaps we should look upon it as the necessary “bad cop” to the warm “good cop” of Scottish Labour. Ahhh, lovely lovely Labour, warm and cuddly. Ahh. But you wouldn’t notice it if you didn’t have someone consistently spitting in your face and calling you a junkie parasite fuck for five years non-stop now and again then would you?

Other discredited arguments around independence focus on the issue of our glittering, nuclear emeralds of the highlands, beloved as one of the wonders of the world (alongside Tennents Super), our much revered Trident Nuclear weapons system. Apparently some folk don’t like the idea of having enough thermonuclear weapons to annihilate the entire world to the tune of Rule Britannia. I for one welcome the ability our country consistently has to punch above our weight, even when it is generally in the faces of Iraqis.

Take our recent Libyan intervention. At first when I heard Colonel Gaddafi snogged Tony Blair, squandered billions of oil reserves and was elected with 99% of the vote I thought he was one of our Westminster colleagues in Glasgow Labour. However after a long and fruitful discussion with our chief whip which included terms like “humanitarian intervention”, “arab spring” and “Frank you are going to vote for this if you don’t want to end up as a Johann Lamont’s intern” I was won round to the justness of bombing another muslim country for democracy. After all why break with tradition – it is what ties this country together. An independent Scottish army would be stuck inside it’s own borders, like our boring Scandinavian neighbours, with their montonously wonderful living standards all whilst Alex Salmond watched missile parades or something. 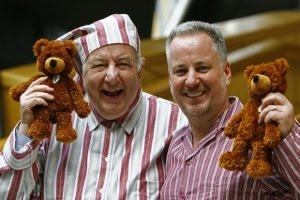 I went to the pub with these two the other week. We were there for 16 hours.

So now that I have basically nixed the issue of seperatism, let me now outline the positive case for the union. To begin with, seperatism is fucking horrendously evil. Don’t even think about it. Every country that has ever ended up independent of the UK has ended up a shitehouse on wheels, period. Scotland would be no different. I mean come on, can anyone name a single small country with lots of oil that hasn’t ended up a disaster??*

The nationalists are all unable to answer the most simple and straightforward of questions, on currency, pensions, weather, traffic, takeaway menus, and saturday night telly line up in a seperate Scotland. It was only last weekend returning from the local boozer that I left some rather incisive queries about currency, defence policy and his team’s proficiency in the SPL on Alex Salmond’s voicemail at 4 am. Needless to say he has maintained a wall of silence to my reasoned queries.

So in conclusion, vote Labour. Or wait no, vote No. Yes that’s the one it is this time, Better Together yadda yadda yadda. After all it is better that we are working together, cooperating in cooperation, holding hands singing kumbayfuckingya and all that other commie pish than the horrendous alternative of me not having a job. I’ll finish on a point my son Tarquin (real name Frank jr) of Glasgow Uni Labour Club raised – the workers may not have a country, but if they did I would have no doubt that country would be THE UNITED KINGDOM OF GREAT BRITAIN, NORTHERN IRELAND, THE MALVINAS, GIBRALTAR AND ONE DAY IRAN,

* Please do not provide me with any examples.

PS have you been able to vote Labour recently? Get cracking on with that if you do.

PPS It would be neglectful of me not to use this as a platform to stand in support of Scottish Labour’s persecuted comrades. I would like to give a big shout out to “The Livingstone Mandela” himself, Jim Divine MP currently serving at her majesty’s pleasure. Then there is Eric Joyce, expelled from our party for a victimless crime (punching a Tory). I’d like to preemptively offer my support and solidarity with Glasgow City Council Labour in their upcoming battle with Kenny McAskill’s single police force and it’s dark agenda of truth and justice