In amongst the saturation media coverage, the constant social media commentary and the pressing need to maximise time spent dancing in the streets, you may have missed some of the amazing things that have happened since Thatcher died last Monday morning. And that’s as if Thatcher dying wasn’t great enough by itself, amirite?! Here’s a not very definitive rundown of some mad shit that’s happened since last Monday:

An event of surely unparalleled significance unfolded last Tuesday when a bottle of tonic was featured on everyone’s favourite wacky American fair and balanced shouty propaganda machine Fox News, amid footage of joyous scenes at the George Square Thatcher death celebrations the previous day. Unfortunately the Fox pundit on hand to discuss the – and I don’t like using strong language –  disgusting scenes in Glasgow failed to pick up on this. And to think, if they’d done a bit of research on Scottish local authority by-laws they would’ve found out that not only were these sickening scenes of drinking in the street er, sickening, they’re also potentially worthy of a £50 fine. Mad cunts.

As we’ve gone into elsewhere the Glasgow party was a boring megaphone rally/paper selling fest until some guy with bagpipes showed up, folk started dancing about and then playing up to the expectant media cameras for a bit. The end result being that it’s now the infamous George Square Thatcher Death Party, with the above photo being reproduced everywhere from foreign facebook memes to every UK paper to press outlets across the globe. YAAAS.

doing the conga cause thatcher’s dead

It’s normal among big newspapers to have all their obituaries, pull-out commemorative supplements, exclusive memoirs etc written years in advance and ready to go as soon as a famous person dies. The Daily Mail though, it seems, goes one step further: by all appearances its smear campaigns against SICK LEFT-WING LUNATICS celebrating Maggie’s death may well have been written years in advance too. They were really that predictable. Particular highlights included the below picture where the Daily Mail have managed to out-Daily Mail even themselves, if that makes any sense:

It ticks every box: “liberal” profession; Hitler reference; UNREPENTANT; had cosmetic surgery paid by your taxes!!!!! 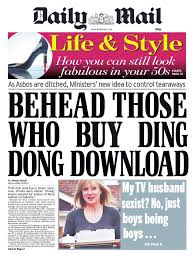 The Scottish edition of the Mail didn’t miss out on this carnival of reaction either, putting considerable resources into “exposing” a couple of people they reckoned were the organisers behind the Glasgow party of hatred, and they even managed to put an anti-independence/anti-SNP spin on it all too!

For further evidence that the Daily Mail has intoxicated itself on  its own sense of self-worth, chauvinism and reds under the bed hysteria, see pretendy-historian Dominic Sandbrook’s stunning piece which envisions a Britain in which Thatcher lost the 1979 election. It’s Cuba without the sunshine and 75-year old Arthur Scargill is still holding the country to ransom! Time to go home Daily Mail, you’re drunk.

4. THESE YOUNG TORIES ARE OBSESSED WITH “THE LEFT”

Check out these brave young souls from Conservative Future who’ve ventured out from the deepest Home Counties to show their support for Saint Maggie of Finchley, but end up cutting a pretty tragic (by which I mean hilarious) act in their desperation to out do “the left”. Nothing but joyous celebration there? Looks like it mate.

If there’s one thing the last week has done it’s act as a reminder that there are tens of millions of people across the country who despise Thatcher and everything her governments stood for. It’s also raised wider issues about the fightback against present day Tory austerity and attacks on welfare, which are going where Thatcher only dreamed of.

The sheer strength of feeling against Thatcher has been so large that it’s been impossible for the political classes and the media to ignore, although hats off to the right-wing press who’ve done a great job of hyping it up over the last 10 days too!

But a more important question that needs to be asked is if the young Tory in the above video is actively trying to model himself on Harry Enfield’s Tory Boy???

5. THIS PIE CHART, MADE AGES AGO, WAS PROVED CORRECT WITH NEAR 100% ACCURACY

This blog was only present at one ceremonial Thatcher effigy burning, which didn’t turn out too well. As impressive as the cardboard structure was (if we say so ourselves!) it wouldn’t really set alight, which can be a fairly prohibiting when it comes to effigies. Fortunately other parts of the country appear to have made more success. like the former mining town of Goldthorpe in South Yorkshire who paraded their effigy before setting fire to it in spectacular style:

And plenty of other things happened too – any weird and wonderful findings feel free to post in the comments below.